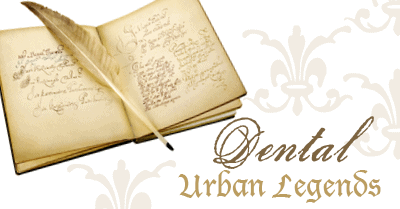 Nothing bugs us more than when people make up stories to try and scare others. We’ve all heard of urban legends, and some of us may have even fallen victim to believing them. What concerns all of us at my Holland dental office are the legends that cause misconceptions about dentistry and the fact that, if believed, could cause people to avoid dental care.

One of the most common dental urban legends out there is one that says root canals are super painful when, in fact, they’re really not a big deal. Those who have had a root canal often say that there was little or no pain involved in the procedure. Where the misconception of pain comes into play is before the procedure even happens. Root canals are needed when there is an infection or deep decay and, as a result, a lot of pain. What your Holland dentist wants you to know is that a root canal is a way to relieve the pain, not cause it.

Another tale that’s well-know is that baby teeth aren’t important. Many people think that if a baby tooth falls out prematurely, or gets a cavity, that it’s not a big deal. In fact, baby teeth are important, as they hold the place for your permanent teeth. If they fall out too soon, or if they become infected or decayed, the natural eruption and placement of your permanent teeth could be altered, leading to greater dental problems down the road.

Lastly – and this one is really important – is the belief that if gums bleed, it’s not a big deal. At my dental office in Holland, we try to educate our patients on the fact that bleeding gums are a sign that something is not right. Healthy gums don’t bleed unless you’re brushing or flossing too roughly. Bleeding gums often mean that you have developed gum disease or even gingivitis. If left untreated, gingivitis could lead to periodontitis and eventually loss of teeth.

Don’t let common dental urban legends keep you from a strong and healthy smile. If you hear of a dental story that you think may not be true, just call my Holland dental office. We’ll be sure to set the story straight, relieve any fear you may have, and get your smile strong and healthy.

Ask us about our revitalizing full mouth restoration!

Ask us how dental implants can bring your smile back!

Ask us how you can find relief.